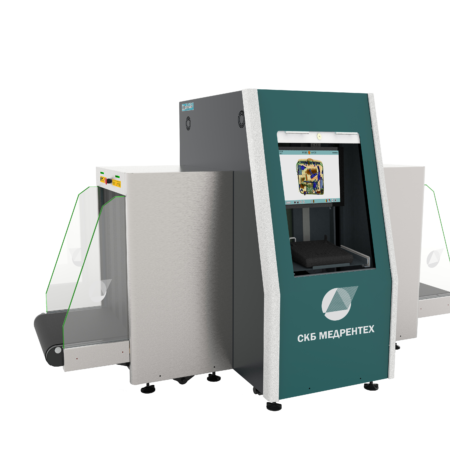 Inspector 65/75ZX is the first inspection X-ray set in Russia with an automatic algorithm for detecting dangerous objects. The system is equipped with two orthogonal rays: one on top and the other on the side. In some cases, the system can estimate the area and thickness of objects, making it possible to calculate their density and mass. “Inspector 65/75ZX” is able to automatically detect explosives and other dangerous substances and objects specified in the settings.

The X-Ray system has an automatic detection algorithm for dangerous amounts of organic matter and metallic elements. The presence of two orthogonal rays eliminates the need of baggage re-scan and significantly increases the probability of detecting dangerous objects and faster screening of the inspection point. “Inspector 65/75ZX” has a special mobile operator console with a control panel and two lockable independent high-resolution monitors, what can be folded with an anti-vandal metal shutter. The system can be assembled inside any room with standard doorways thanks to its sectional design that is also patented. “Inspector 65/75ZX” is approved by the Center for Special Equipment of the Federal Security Service of Russia, SS PP RF of the Russian Federation No. 969 of September 26, 2016, has the Certificate of Conformity of Civil Aviation and all necessary permits. In 2014 the X-Ray system was operated for 1750 hours straight at Sheremetyevo Airport that proved its highest reliability.